I’ve mentioned this several times, but my work goes through a process before I set it up for publication.  A quick summary:

I self edit it.

I send it to Beta Readers.

I send it to a professional editor.

I have it published.

When I list it all out like this it seems very simple.  But anyone who has ever put words on paper knows it isn’t so simple.  Most writers understand the first part.  Write it.  And most writers are capable of sending it to a professional editor and changing what they mark up.  But many writers miss the middle parts.  And, like a sandwich, the meaty parts are in the middle. 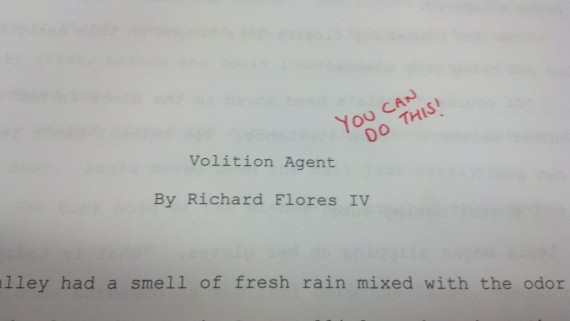 If you’re going to send this off to professional editor, why is self editing so important?  Well, two things.  Editors are humans too, they won’t catch everything.  Especially if your manuscript is error plagued. Second, you will quickly find that you discover a lot about what doesn’t work in your story’s plot by doing a self edit.

When I self edit, I find that I still miss a lot.  So I learned a little trick, and tried it out for the first time with the Volition Agent manuscript. I printed the entire manuscript and went over it, using a red pen to mark up what changes I needed.  I use the red pen because it stands out.  So when I went back to make changes, I could find them quickly and fix them quickly.  I print it out because it gives me a chance to read my words in a different way than I did on a computer screen.  When you look at your words in a different way, things stick out that you would otherwise miss.

When I self edit, I look for the following things:

Grammar mistakes.  This is the first thing I look for, though I am also the first to admit I am very bad at catching them.  Though I did find that having the manuscript printed in front of me (versus on my computer screen) was much easier at seeing these things.  But still, I recognize that grammar is not my strong suit so I do my best with checking for this stuff.

Punctuation errors. For me, this is most often missing punctuation.  No period.  Using a period when I meant for a question mark. The other thing that I have a habit of doing is putting a quotation mark at the end of the paragraphs during multiple paragraph dialogue (by one speaker). So I have to remove those.

Typos. I type at 60 words a minute with no errors.  But when I write my stories, I typed at 80-90 words per minute with a lot of errors.  Some have told me to just slow down.  But when I type from my mind, my mind goes much faster then 60 words a minute.  Probably much faster then 90 words per minute.  So I often find a lot of typos, missing words, or added words.  Easy to fix, and really easy to spot when you read it.

Plot Errors. I’m not an outline writer, so I ofter find things in the early chapters that I missed or didn’t need to continue the story for the later chapters.  I’d say 90% of my red marks on my manuscript this time around were for plot and prose issues.  Either to remove something or to add something.  In fact, I reworked the entire ending and will be going back to add 5 new chapters throughout the book.  Some will say this is why outlines work.  But I also know many outline writers.  They too say the bulk of their self editing goes to the plot.  The most important part of your story is the plot, followed by how you tell it.  Remember this doesn’t just include missing or extra plot points.  This includes all aspects of your story not related to the above topics.

Said Tag.  English teachers love to tell you about the 1,000 different way to say ‘said’ or now I think they want to make it a million ways.  It is all a bunch of bull. It is made up by English teachers (just like the author’s message). Said is the simplest (and most over looked) word to describe dialogue.  Since I write a lot of official reports at work, I am am trained to write “stated” on most dialogue in my reports.  So I often find my stories are loaded with “stated” instead of “said”. So I have to fix those.  But the best way to break up dialogue is not with “said” but with some type of action.  For example: “I’m writing my blog,” Richard didn’t even look away from what he was doing.  His fingers still clicked on the keyboard. “I’ll take care of the garbage when I am done.”  So where applicable, I avoid using any dialogue tag and use action.

Repeated words.  My characters like to look at each other a lot.  They also love to smile.  So I often over use those two words.  Repeated words are not always bad, sometimes it is required to make a point.  But overuse of any word will be noticed by a reader and can become jarring.  So I look for those.  I also look for repeated phrases and dialogue points through out my story.

What are Beta Readers?

I’m having a heck of a time finding beta readers for Volition Agent. I think this is largely because people don’t understand what a beta reader is.  If you know video games, beta testers get their hands on an early copy (not finished) of a game.  They get to play it and in return they provide feedback to the game developer.  They let them know about glitches in the game, issues with game play, story elements that seem out of place, and an overall opinion of the game.  The developers take that information consider it all and then make changes where they think they should.

Beta readers do the same thing.  They get an early copy of the book.  They read over it, point out mistakes, things that confused them, story issues, grammar mistakes, and provide an overall opinion of the story.  The writer takes all this information and uses it to make the book better.  Just as a developer won’t change everything the testers complain about, an author won’t change everything.  But they will make the story better as a result of the Beta Readers’ input.

Beta Reading shouldn’t be confused with Advanced Reader Copies (ARC).  Typically ARCs are finished.  They are handed out to reviewers in exchange to get review quotes to hopefully use on the book itself. That’s how all those review quotes wind up on the book the day it is published.  Sometimes review quotes are gathered from Beta copies, but that isn’t the purpose of a beta reader.  The beta reader is there to improve the work so the author can put out the best story possible.  Advanced Readers are there so the author can better market their work.

Why self edit again?

If you took all the information from beta readers, and did nothing with it.  Well that would be a complete waste of everyone’s time.  While you might not change everything the beta readers point out.  If the majority of them say that a certain scene doesn’t work.  It would be best if you made it work.  Once you make significant changes you need to review those changes for yourself, the same way you did the first time.  That will involve a whole rereading.  But it is worth it to put out the best book you can.

Once you’ve got the meat together in you sandwich, it’s time for the top piece of bread.  Get a professional editor and have them review it.  Then your sandwich, um I mean story, will be ready for the masses.

This site uses Akismet to reduce spam. Learn how your comment data is processed.